The induction of type I interferons (IFNs) is a first line of defense against pathogens encountered by the body. From a research standpoint, a chief role of these cytokines is as qualitative and quantitative beacons of both innate and adaptive immune responses. In addition, there are several diseases for which IFN is utilized as a therapy, and many more that have pathology caused by activation of IFN and induction of the downstream genes regulated by these cytokines. Given their increasing prevalence worldwide, the need for new and more effective therapies for autoimmune and inflammatory diseases is apparent.

Murine model systems of several autoimmune and inflammatory diseases are well-established, and have been successfully employed to elucidate disease pathology as well as to evaluate the efficacy of therapeutic approaches. For most diseases, both spontaneously arising and induced murine models are actively employed in research. Spontaneous models result from alterations to an animal’s genetics, whereas induced animal models are generated through exposure to chemicals or antigens.

The importance of using murine models to study IFN-associated diseases is highlighted by the fact that several therapeutic approaches first evaluated in animal models have progressed to clinical trials and have subsequently gained approval for human use. For example, IFN-beta administration is the standard of care for treatment of many multiple sclerosis (MS) patients.1 However, the exact mechanism of action of IFN in this disease remains unclear. Thus, the role of IFN-beta in both the inhibition and pathogenesis of autoimmunity remains an area of much interest. Moreover, due to the side effects and difficulty administering IFN therapies, novel formulations of these therapies are continually being developed and tested in animal models prior to entering clinical trials.

Multiple Sclerosis (MS) is a debilitating autoimmune disease that affects the central nervous system. Long after the value of IFN-beta as a therapeutic in the treatment of MS was recognized, the role of the Th17 subset of cells, and subsequently a major mechanism of action for IFN-beta, was demonstrated in the experimental autoimmune encephalitis (EAE) mouse model of MS.2 EAE is induced when mice are immunized with myelin, myelin components, or related synthetic peptides. Mice lacking the type I IFN receptor have been shown to develop more severe EAE, and IFN-beta has been shown to specifically inhibit human Th17 cell differentiation.2,3 More recently, this effect has been shown to be mediated through the regulation of dendritic cell (DC) activation and migration by IFN-beta. This is key due to the role of DCs as drivers of the pathogenic Th17 cell response in this disease.4

While EAE is the most commonly used model, it does have limitations. Therefore, some researchers use either toxin or virus-induced demyelination, such as infection of mice with Theiler’s murine encephalomyelitis virus (TMEV) as a model system for MS. Intracerebral injection of TMEV, a single-stranded, positive polarity RNA picornavirus, results in an acute infection followed by chronic demyelination and MS-like pathologies.5 While these models do not recapitulate all clinical and pathological features of MS, their utility has been substantiated through their use in the generation of several approved therapeutics.

Systemic lupus erythematosus (SLE) is an autoimmune disease characterized by autoantibody production, lymphoid activation and hyperplasia, and lupus nephritis.6 A hallmark of SLE is the overproduction of type I IFNs and a strong interferon response gene signature. In fact, the relatively recently coined term interferonopathy is often used to refer to SLE. Interferonopathies are a group of Mendelian disorders believed to be caused by mutations in DNA-sensing and proteasome machinery. While it remains to be proven that type I interferon is causative of these diseases, there is a correlation between overproduction of this cytokine and the onset of these disorders.7

Murine SLE research focuses predominantly on several key spontaneous and induced mouse models. Frequently used spontaneous models include the NZB/W F1 mouse, which is an F1 hybrid between the New Zealand Black (NZB) and New Zealand White (NZW) strains; the MRL/lpr; and the BXSB/Yaa strains. Induced SLE models include the pristine-induced model and the chronic graft-versus-host-disease (cGVHD) models. Each of these models share some pathophysiology with the human disease, and research into the unique genetics of the spontaneous murine models has led to many important discoveries. In addition, clinical IFN administration used for the treatment of other diseases has been reported to cause lupus-like symptoms and autoantibody overproduction in a subpopulation of patients.8

Rheumatoid arthritis (RA) is a chronic inflammatory condition that causing inflammation and thickening of synovial fluid in joints. Among several models of this disease, immunization of DBA/1 mice with type II collagen in complete Freund’s adjuvant is prevalently used, as it results in erosive polyarthritis and an autoimmune response against cartilage. Collagen-induced arthritis (CIA) has been applied to several gene-knockout mice in order to determine which genes might be involved in this autoimmune disease.9 As a result, important roles for certain class II MHC haplotypes as well as PTPN22, a tyrosine phosphatase, have been identified in some patient populations. Furthermore, the importance of IFN-gamma in the pathogenesis of RA has been suggested by studies of CIA in mice deficient for the IFN-gamma receptor.10 Passive immunization models of RA include collagen antibody-induced arthritis and K/BxN antibody transfer arthritis.

In addition, a transgenic mouse overexpressing TNF-alpha has been utilized as a spontaneous model of RA.11 The first line of treatment for RA consists of TNF antagonists; however, 40 to 50% of patients fail to respond to this approach. For some of these patients B cell depletion therapy using rituximab has been shown to be efficacious. Moreover, recently it has been shown that baseline interferon response gene levels can be a predictive biomarker for non-response to rituximab.12

Asthma is defined as chronic inflammation of the airways and is generally thought to occur in response to constant or intermittent exposure to antigens. T helper type 2 (Th2) cells are key mediators of the immunopathology of asthma.  Huber et al discovered a role for type I IFNs in the inhibition of human Th2 cell development, indicating a potential additional therapeutic application for this cytokine.13 The precise cellular and molecular mechanisms underlying the inflammation and tissue changes in asthma remain undefined. However, several mouse models based on aerosolized exposure to an antigen, often derived from the ovalbumin peptide, have been developed and are currently in use to study airway hyper-responsiveness. While these acute challenge models reproduce many of the clinical features of asthma, the pattern and distribution of pulmonary inflammation is different than that seen in human disease.14 Kumar et al recently suggested that most murine asthma models represent potentiation of chronic asthma rather than acute exacerbations, which are the most cause of healthcare visits and hospitalizations.15 In humans respiratory viral infections are believed to cause the majority of acute asthma exacerbations.

Inflammatory bowel diseases (IBD), including Crohn’s and colitis, are caused by dysregulation of inflammatory mediators resulting in an imbalance in gut innate and adaptive innate immune responses. Although they have similar etiologies, the pathogenesis of Crohn’s and ulcerative colitis are markedly distinct. Crohn’s disease is a chronic inflammatory bowel disease characterized most frequently in humans by inflammation of the terminal ileum, although it can affect any of the gastrointestinal tract. In contrast, colitis affects only the inner most layer of the colon.

It is hypothesized that these diseases are a consequence of breakdown in intestinal barrier function, resulting in exposure of microbial antigens to the immune system. An association between mutations in the Nod2 gene in humans and onset of Crohn’s disease has been discovered. Nod2 is an activator of innate immune responses including production of IFN-beta, thus highlighting the potential utility of this cytokine as a downstream readout in Crohn’s disease. Moreover, recent studies have supported the role of dysregulation of the type I IFN response in IBD.16 A variety of chemically- and genetically-induced murine models of this disease have been utilized, as well as spontaneous models of chronic ileal inflammation.17 The most common chemical inducers of IBD are 2,4,6-trinitrobenzenesulfonic acid (TNBS), dextran sodium sulfate (DSS), and oxazolone.18,19

One of the most famous mouse research models, the non-obese diabetic (NOD) strain of mice, was first isolated in the early 1980s.20 This strain harbors multiple genetic mutations that result in the development of diabetes with 100% penetrance. While the role of IFN in this autoimmune disease is still under investigation, findings point to type I IFNs as initiators of type 1 diabetes in the NOD mouse.21 Further, type 1 diabetes is considered an interferonopathy as it has been found that expression of interferon-inducible genes correlate with its onset.22 The utility of the NOD mouse model in the study of type I diabetes is exemplified by its continued use, as well as the transfer of therapies derived from studies in this mouse to human clinical trials. Similarities between the NOD mouse and human disease include the development of spontaneous autoimmune disease, pancreas-specific autoantibodies, accumulation of autoreactive T cells, and synteny with human disease.23 Further study of the role of IFN in this disease is clearly indicated.

Immense contributions have been made to the fields of autoimmune and infectious diseases as a result of the analysis of animal models. While it is not always possible to extrapolate murine-based results into human clinical settings, the utility of animal models as a first approach to both study the basic biology of diseases and to test potential therapeutics continues to be an important part of life science research and drug discovery process. As additional model systems and more efficient downstream measures of autoimmunity become available, insight into the precipitating causes of autoimmunity, as well as potential therapeutic interventions, can be rapidly uncovered. Accurate quantitation of IFNs as a measure between healthy and disease state will allow further understanding of their roles in these diseases, and may lead to better treatment efficacy. 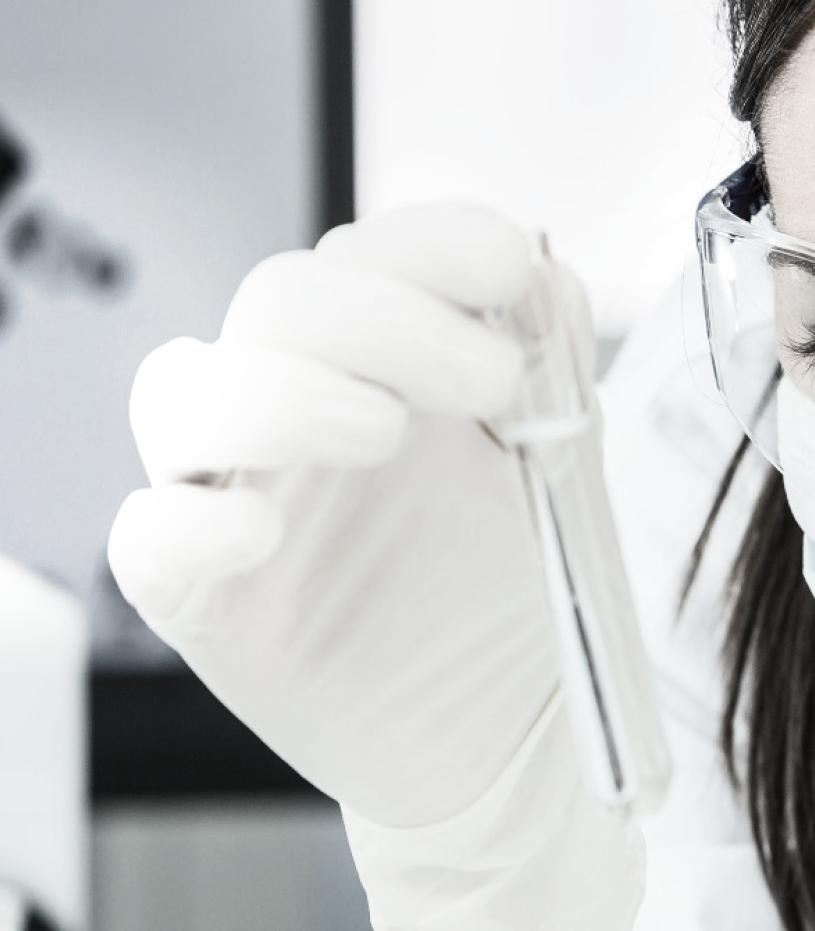