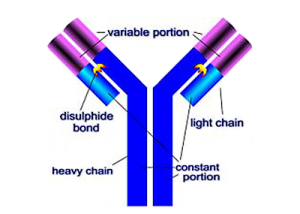 An antibody is an Immunoglobulin (Ig) produced in response to the recognition of foreign molecules in the body. Structurally antibodies exist as one or more copies of a Y-shaped unit, composed of 4 polypeptide chains. Each molecule contains 2 identical copies of heavy chain, and 2 identical copies of a light chain, named according to their relative molecular weights. The N-terminal region of the light and heavy chains each have a domain of approximately 110 amino acids known as the variable region and serve as the antigen binding site of the molecule. The specificity of an antibody is based on the antibody epitope affinity, the antibody/antigen valency, and the structural arrangement of the interacting parts.

Polyclonal antibodies are obtained from serum of animals immunized with a particular antigen. The antibody mixture obtained from serum is the result of many B-cell clones, each producing one specific antibody. This mixture of antibodies often can recognize multiple epitopes (region of an antigen that binds to an antibody), making them more tolerant to small changes in the structure of the antigen.  It is often a better choice for detection of denatured proteins. Also, polyclonal antibodies may be generated in a variety of species such as rabbit, sheep, and donkey. This provides a greater number of experimental options to researchers.

The interaction between an antibody and an antigen forms the basis of all immunochemical techniques. Methods such as Enzyme-Linked Immunosorbent Assay (ELISA), Western Blot, Immunohistochemistry, and Flow Cytometry rely on the specificity of antibodies. It is important to note that when designing experimental procedures, the goal is to choose an antibody system that provides the greatest sensitivity and the least amount of cross-reactivity. It is also important to choose between monoclonal and polyclonal antibodies as they both have their advantages and limitations of their use in immunochemical techniques.

The basic principle for ELISA makes use of immobilized antibodies to specifically “capture” soluble antigens in samples. The fixed antibody/antigen complexes once wash free of excess reagents reacts with a substrate to yield a colored product that can be easily visualized and quantified spectrophotometrically. The method chosen for each ELISA depends on factors such as solid phase antibody coating condition, antibodies specificity and incubation time, as well as washing conditions.

Flow Cytometry is a technology that allows the measurements of a variety of characteristics of microscopic particles such as cells in a stream of fluid.  Instruments used for this method can gather information about cells by measuring visible and fluorescent light emissions. Measurable parameters can be based on physical, biochemical and antigenic traits. Researchers frequently used flow cytometry to determine the types of markers and receptors on the surface of a cell by using labeled antibodies or receptor ligands.

The neutralizing antibody (NAb) prevents formation of an active IFN receptor complex thus inhibiting the immunomodulatory, antiproliferative, or antiviral mediated response induced by interferon. In a neutralization assay, interferon is pre-incubated with a specific neutralizing antibody. The IFN-NAb mixture is added to the cells plus virus or agonist. For optimal conditions, the concentrations of interferon, neutralizing antibody dilution and incubation times need to be determined empirically. 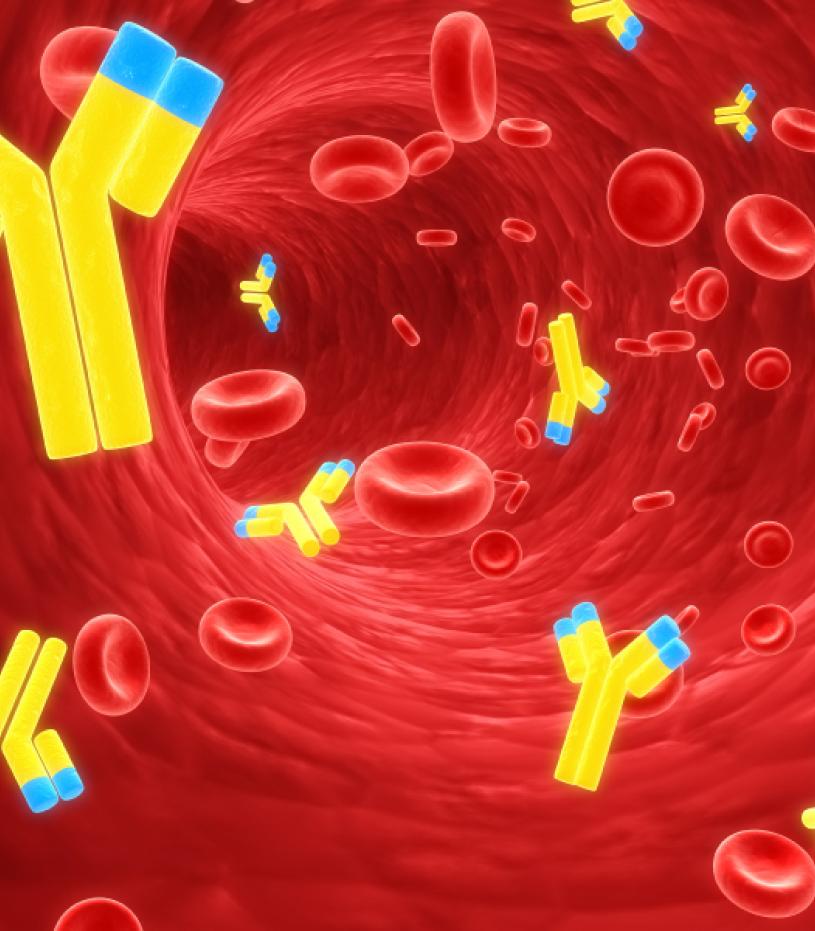