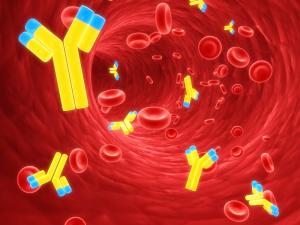 Interferons are potent cytokines that can inhibit viral replication, limit cell proliferation and enhance activation of the adaptive immune responses. Most interferons display strong species specificity. However, closer species relationships tend to lead to higher cross-reactivity. For example, non-human primates have been shown to respond to human IFNs both in vitro and in vivo. In contrast, human IFN-α2 has an EC50 of <1U/ml on human A549 cells, while the EC50 on murine cells is >1000U/ml. One exception to this phenomenon is the discovery that Madin-Darby bovine kidney cells (MDBK) were broadly cross-reactive to human IFN-α including human IFN-α2. Consequently, researchers who work on human interferons can find themselves working on multiple cell lines of different species lineages. One useful technique used to prove the biological activity of human IFN-α is to conduct a sample analysis with and without an antibody that neutralizes IFN-α. One caveat is the substantial sequence variation between the type I IFN receptors expressed on human, non-human primate and especially bovine cells. Therefore, one cannot assume that the IFN:receptor interactions behave the same on each cell line. This study was conducted to determine if a rabbit polyclonal antibody raised against human IFN-α2 would inhibit the activity of human IFN-α2 on human (A549), NHP (LLC-MK2) and bovine (MDBK) cells.

Cell lines: Human A549 cells (human lung carcinoma) were maintained in F12 media supplemented with 10% FCS. LLC-MK2 (rhesus monkey kidney cells) were grown in MEM supplemented with 10% FCS as were the MDBK (bovine kidney cells). Cells were plated at subconfluent levels the day before neutralization experiments were initiated. Neutralization Assay: Human IFN-α2b at 50 U/ml (PBL catalog # 11105-1) was combined with dilutions of the neutralizing antibody rabbit anti-human IFN-α for 60 minutes then the IFN-α/PAb mixture was added to each respective cell line. The cells were subsequently returned to the incubator for 20 hrs. Each cell line was then subjected to viral challenge as follows: A549 cells were infected with a 1:10,000 dilution of encephalomyocarditis virus (EMCV) and MDBK cells were infected with a 1:100,000 dilution of vesicular stomatitis virus, while the LLC-MK2 cells were challenged with a 1:10,000 dilution. Plates were incubated for 24-36 hours following addition of virus cells were stained with crystal violet. The cell density was determined by OD450 measurement on a Molecular devices Vmax plate reader. Neutralization titers were determined by the following formula: Divide IFN-α units/well by serum dilution/well.

The addition of IFN-α2 at 50U/ml resulted in complete protection of each cell line tested when challenged with the appropriate quantity of virus. In contrast, the cells which did not receive IFN-α2 displayed complete loss of monolayer. The addition of polyclonal antibody directed against human IFN-α2 displayed similar dose-dependent loss of antiviral activity regardless of cell type or virus.

Human IFN-α studies are primarily carried out on human cells. However, there are instances when other cell lines are utilized. MDBK cells have proven useful since they respond to human alpha interferons, but not to beta interferon. In contrast, non-human primate cells are often used as a prelude for more formal in vivo studies in monkeys. Neutralizing antibodies provide a useful tool to demonstrate that the effects are specifically due to interferon. However, it is not clear if the IFN-receptor interaction between each cell line tested could be inhibited by a polyclonal antibody. This study clearly indicated that the polyclonal antibody raised in rabbits against human IFN-α2 could indeed interact with the protein to sufficiently inhibit protein activity on all cell lines tested.

A Cost-Effective Antibody Cocktail for Neutralizing Human Type I IFNs