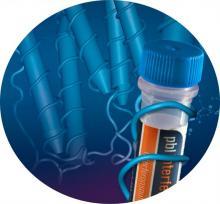 Interferon-gamma (IFN-γ) is a pleiotropic cytokine secreted by Natural Killer (NK) cells and many T cells. It is the sole representative of Type II IFN. IFN-γ has pleiotropic activities including: inducing an antiviral state in cells, upregulating cell surface markers such as Class I and II MHC, and regulating the activity of macrophages, NK cells, neutrophils, B-cells, and T-cells. As such, IFN-γ is one of the most widely studied proteins [Scroder et al (2004) J. Leuk. Biol. 75:163; Young and Bream (2007) Curr. Top. Microbiol. Immunol. 316:97].

IFN-γ binds to a heterodimeric receptor consisting of the IFN-γ Receptor Chain 1 (IFNGR1), which provides binding affinity, and Receptor Chain 2 (IFNGR2), which is involved in signal transduction. Recent evidence has suggested that the receptor actually has a tetrameric structure consisting of two IFNGR2 molecules and two IFNGR1 molecules. Binding of IFN-γ leads to a conformational change and subsequent signal transduction [Krause and Pestka (2007) Cytokine Growth Factor Reviews 18:473].

In Figure 1, the purple and teal regions are the two chains of the IFN-γ dimer and the Receptor Chain 1 is in orange. This model was produced in Protein Explorer using the 1FG9 structure [Thiel et al. (2000) Struct. Fold. Design. 8:927]. Thus the IFN-γ dimer structure is important for full activity, and characterization of the dimer status of IFN-γ is an important determinant of quality. IFN-γ (PBL# 12500) produced from E. coli  via recombinant technology was characterized by Size Exclusion Chromatograph (SEC) in comparison to IFN-Alpha 1b (Alpha D) (PBL# 11125), a monomeric protein. Figure 2 shows that the IFN-γ has an apparent molecular weight of 38.8 kDa, which is consistent with a dimeric structure. There was no measurable monomer, and aggregates represented <1% of the material.

SEC is a more stringent test of aggregate content than non-reducing SDS-PAGE as it measures both non-covalent and disulfide-linked aggregates.

Figure 1. Crystal structure of human IFN-γ bound to its receptor. 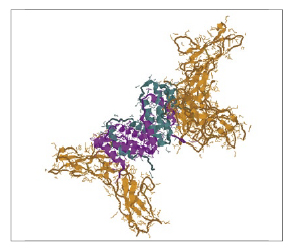 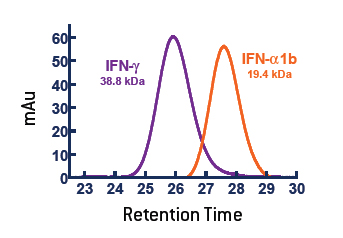 Aggregates can also be measured by light scattering. Although not as sensitive as techniques such as Dynamic Light Scattering, measuring the absorbance of a protein solution at a wavelength where the protein has little or no absorbance, such as 330 or 320 nm, provides a reasonable test for aggregates [Pace et al. (1995) Prot. Sci. 4(11):2411].

The result of comparing PBL IFN-γ preparations with lyophilized samples from two other vendors suggests that the aggregate levels in the samples from the other vendors are relatively high (Table 1). Lyophilization can lead to aggregation and/or loss of activity; optimum conditions should be carefully examined for each protein.

ELISA detection of IFN-γ is a sensitive method to determine levels of this protein in a variety of matrices. Percent recovery was calculated at three data points with respect to the standard provided in the VeriKine Human IFN-γ ELISA Kit (PBL# 41500).The PBL Human IFN-γ (PBL# 11500) protein, which was prepared independently from the kit standard, gave the closest reading to the expected values, well within the parameters of the kit. All values are the average of three experimental determinations (Table 2).

The standard assay for IFN-γ activity is the induction of an antiviral state in target cells, also known as the Cytopathic Protection Effect (CPE) assay. For this purpose, we use A549 human lung carcinoma cells challenged with encephalomyocarditis virus (EMCV) (PBL# 91500). This provides a stable, sensitive assay for Type II IFN when calibrated to the International Standard for human IFN-γ (Gxg01-902-535) (Figure 3).

Overall, PBL Cat. No. 11500 appears to have similar activity as the International Standard on a mass basis, although these results will vary from experiment to experiment. The activity of the PBL IFN-γ was then compared to three other vendors’ products in a side by side analysis, which provided a reasonable comparison of the activities. The concentration of the material was determined by the ELISA values and the activity in comparison to the International Standard. (See Table 3 in the PDF by clicking "Download")

There are many tools that can be used to characterize a protein product. SDS-PAGE, Reverse-Phase HPLC, and other methods all give useful information. Aggregation state by SEC-HPLC or UV/Vis spectroscopy, ELISA reactivity, and Bioactivity have been used in this study to compare a number of IFN-γ preparations. The activity of the two lyophilized preparations and the PBL product are similar yet the lyophilized products appear to be more highly aggregated. The activity of the material from Vendor C, which, like the PBL product is provided in PBS/BSA, appears to be about half that of the PBL product. This study demonstrates that a number of factors need to be considered in determining the source of a product such as IFN-γ.

IFNs were from the PBL inventory or purchased from three vendors. The VeriKine Human IFN-γ ELISA (PBL# 41500) was performed according to the instructions. All samples were diluted based on the specification sheet to a nominal concentration of 500 pg/ml and then full dose response curves were analyzed. Plate absorbance was determined with a Vmax plate reader (Molecular Devices) at 450 nm, and data was analyzed using four-parameter curve fit using the SoftMax package (Molecular Devices). 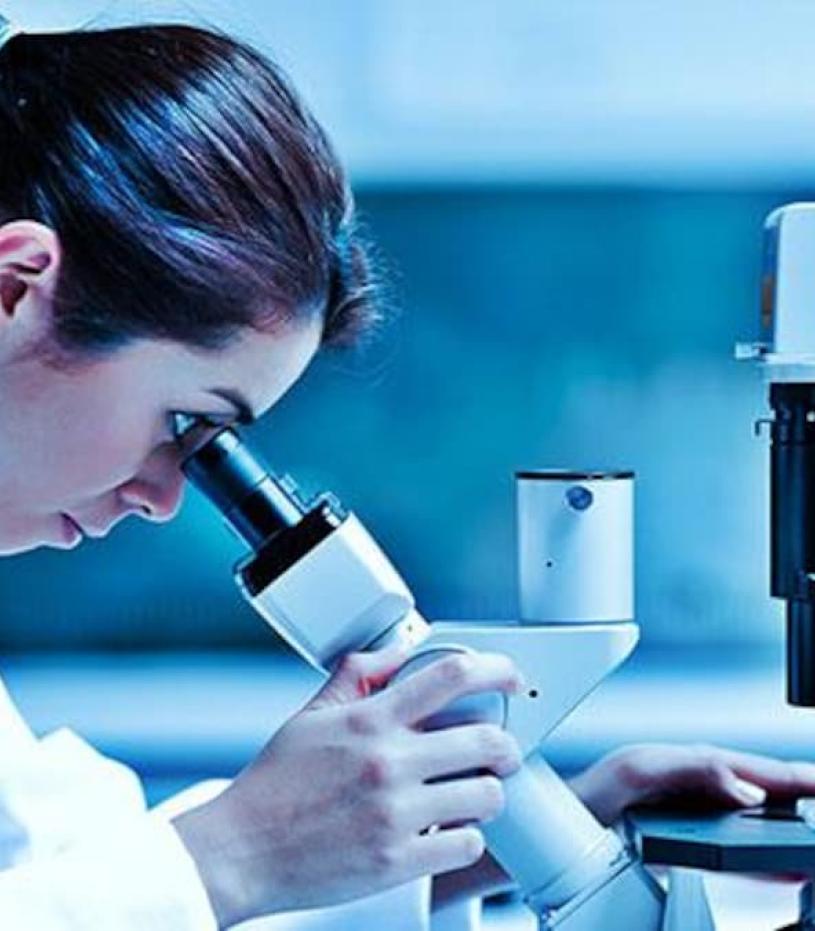